There is one day out of 15 years on the Mississippi River that stands out in my memory... It was the day ...

When FISH FLEW and EAGLES SWAM
by Pat Middleton

I was on the Mississippi Queen, a day out of Alton, Illinois, perusing the river with binoculars as I generally do on the boat. While the American Bald Eagle is no longer unusual to find on the river, I saw an event that very few people can claim.

Spotting an eagle is always exciting for passengers on the boat and this eagle was to give us a special performance! He had spotted a fish and had come in for the catch, talons outstretch, wings in a deep "V."  He hit the water at full force and immediately gathered up his wings to take off with his prize. We could see the fish in his talons... a very BIG fish that he was apparently unable to lift away. So he began SWIMMING back to shore, with a strong "breast stroke"!  He never did make it back out of the water, but with strong strokes of his black wings, he did swim clear back to a sandy beach area, pulled out his fish, and proceeded to feast! 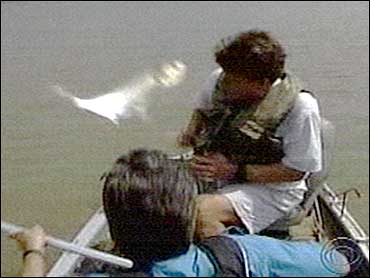 Since that day I have seen two other eagles swim back to shore with their prize. But that day would have been memorable for that experience alone. The 2nd experience of that day was even more amazing!

I had finished late dinner and was standing on the bow with Bill Wiemuth, the Riverlorian for that cruise. Suddenly we heard a heavy splash in the water.

"Check your loved ones!" he called to the decks above. He was dead serious. It did indeed sound like a person could have hit the water. Then there was another splat, and another! Was someone THROWING people off the deck?? Suddenly the deck hand below shouted up, "It's a fish! There's another one... they are landing all over the deck down here."

"Flying Carp!" I called down in amazement. The paddlewheel had disturbed a school of the 9-20 pound Asian Carps and they were doing what these carp will do... flinging themselves out of the water and toward the boat that was disturbing them. I explained that behavior to the passengers now clustered along the railings.

We had chalked up two "firsts" in a single day!!

Click Here for More on ASIAN CARP and other exotic species